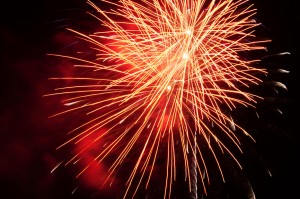 When you think about the “Fourth of July”, a few things come to mind like picnics, grilling and watching the fireworks with the kids.  Unfortunately, this year’s fireworks display in Simi Valley, CA turned awry as multiple fireworks canisters went off too close to the ground causing explosions and debris to be shot at nearby spectators.  The present count of the persons who were injured stands at thirty nine.  (See  ABC News Footage ).  Our thoughts and prayers go out to the victims and their families.   In that there was a similar mishap at last year’s pyrotechnics display near San Diego, CA, I wanted to explore the legal issues associated with these types of incidents.

The legal issues presented by these and other similar incidents involving fireworks malfunction are what constitutes negligence and what legal standard applies.  A related issue is whether the standard for negligence differs between the various “players” in these types of displays including the manufacturer of the fireworks, the pyrotechnic professionals hired to launch the fireworks and the entity who sponsors or sets up the event.

California, like many other states, defines “negligence” as an injury or damage caused by a lack of “ordinary care.”  However, like many jurisdictions, California holds persons engaging in “dangerous activities” to a higher standard of having to use “extreme caution.”   For example, in the case of Warner v. Santa Catalina Island Company, 44 Cal.2d 310, 317, the owner of a shooting gallery was held to this higher standard when bullets malfunctioned and injured a patron.  The court reasoned that operation of a business involving explosive materials like bullets required a higher duty to inspect and test the ammunition for close range shooting prior to distributing it for use.  Therefore, it would appear that the persons responsible for setting up the launch and ignition of fireworks may also be held to this standard of “extreme care.”  As stated by the California Supreme Court, “the care required must be in proportion to the danger to be avoided and the consequences that might reasonably be anticipated”.

The further question becomes who could be liable other than the pyrotechnists.  For insight on this, I found a very similar case entitled Ramsey v. Marutamaya Ogatsu Fireworks Company, 72 Cal.App.3d 516, which involved the exact same scenario, namely, persons injured at a fireworks display from malfunctioning pyrotechnics.   In that case, the plaintiffs who were injured and burned by the premature explosions brought claims against the manufacturer and display personnel along with the sponsors of the event which included a Japanese trade organization and the San Francisco Chamber of Commerce.  After a non-jury trial in which all of the defendants were found liable, the sponsors appealed and argued that they only had a duty to hire competent fireworks professionals and could not be liable for any negligent acts of those professionals including any faulty manufacturing or launching of the aerial bombs.  The California Court of appeal disagreed and upheld the verdict against both the pyrotechnists and the sponsors.  The court relied upon authority including Section 423 of the Restatement Second of Torts, which holds the employers of entities which engage in “dangerous activities” to the same liability as any contractors they employ. (See Ramsey at page 525).  It is also interesting to note that the plaintiff’s in the Ramsey case sued under theories other than negligence including strict products liability which potentially holds both the manufacturer and all persons in the chain of distribution liable for defective goods (in this case explosive devices).

This is not to say that the plaintiffs in this type of action do not also have some degree of legal responsibility to act reasonably while watching the fireworks display.  This goes back to my discussion in my post yesterday regarding comparative negligence and apportionment of fault.  For example, in Matthews v. City of Albany 36, Cal.App.2d 147, the court found against a plaintiff who was injured when he found an unexploded shell from a fireworks display and decided to try to explode it himself.

The conclusion to come to with regard to this latest incident of malfunctioning explosives in Simi Valley and other similar incidents is that civil liability in these cases is fairly clear due to a heightened duty of care.  As with all legal matters, however, it will really depend upon a lot of facts that are presently unclear.  Questions will need to be answered like the following: What caused the malfunction (faulty fireworks, faulty ignition, etc)?  Was there a lack of caution in where the launch was set vis a vis the crowd?  Did any of the crowd observers venture too close in an area that may have been marked as off limits?  Who hired the pyrotechnists and how did this process take place?

The bottom line is that this is a tragic scenario and no matter whether it spawns civil claims for personal injury or not (which I assume it will), a prompt and thorough investigations needs to take place to ascertain what went wrong and how to prevent it from happening again.