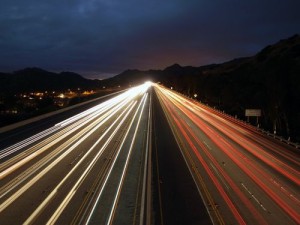 Speeding is one of the most common causes of motor vehicle accidents in the United States. More than 10,000 deaths each year are attributable to accidents in which one or more of the drivers was speeding. In terms of economic impact, the National Highway Traffic Safety Administration puts the cost of accidents caused by speeding at more than $40 billion a year.

There are 34 states that have maximum speed limits of 70 mph or higher for motor vehicles. Although the highest posted speed limits in California of 70 mph speed are restricted to rural interstate highways and limited access roads, a new report linking speeding and motor vehicle accident fatalities offers evidence that drivers in populated urban areas, such as Oakland and San Jose, are ignoring posted speed restrictions.

Eleven of the 20 cities in the United States ranked by the Auto Insurance Center as having the highest average vehicle speeds in fatal accidents are located in California. Some of the 11 cities and the average reported fatal accident speeds include:

The state had three highways listed among the 20 fastest roadways in the U.S. based upon the average speed of vehicles involved in fatal motor vehicle accidents occurring on them. Included on the list was Interstate 580 in the East Bay area, I-10 that goes through Los Angeles and San Bernadino, and I-5 that goes through San Jose.

Surprising statistic: California drivers are not the fastest

The Auto Insurance Center report listed 10 states as having the highest average speed in the nation. California does not appear on the list. This might indicate that traffic congestion, roadway design and other situations could be factors that when combined with excessive speed contribute to fatal accidents.

Another point made in the report is that the average speed of vehicles involved in fatal accidents appeared to be related to the age of the drivers. Drivers in their early 20s had the highest speeds in accidents in which someone was killed. Motorists in their 80s had the lowest speeds.

How speeding contributes to accidents

Stopping a moving vehicle takes more time than most people realize. Studies have shown that it can take 1.75 seconds for the brain to process information picked up by the human eye. If a driver sees something in the road, whether it be another car or a pedestrian, there is a delay from the moment it is seen until the driver’s brain identifies it and decides what must be done to avoid it.

A vehicle traveling at 55 mph will cover a distance of 142 feet while the brain is processing the information it received from the eyes. Once the driver realizes the brakes must be applied, the vehicle will travel another 61 feet before the driver begins the act of braking. At 55 mph, the car or truck could travel another 216 feet before it actually comes to a stop. A higher rate of speed will increase the stopping distances and make it more difficult for a motorist to take action to avoid an accident.

Speeding can also make it difficult for a driver to maintain control of a vehicle. This is particularly true on curves where excessive speed can cause a car or truck to skid. Even on straight roadways, speeding increases the chances of hydroplaning on wet roads. Hydroplaning is when the tires lose contact with the surface of the road and cause a driver to lose control of the vehicle.

Wearing a seat belt and obeying posted speed limits is a good way to begin reducing the number of fatalities on California highways, but there is more that drivers can do to improve road safety. Remaining alert and avoiding distractions, such as talking on cellphones and texting while driving, can play an important role in accident avoidance.

Motorists whose excessive speeds cause accidents could be engaging in negligent conduct. A person who is injured or killed might be entitled to sue the negligent driver for damages. A California motor vehicle collision attorney can assist an accident victim or the victim’s family through the process of obtaining financial compensation.