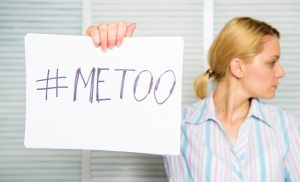 It doesn’t matter the nature of the organization – the workplace should feel like a safe and secure environment for its employees. However, in countless unfortunate cases, it can be a place of unwelcomed interactions leading to sexual discrimination, harassment, or worse – sexual assault.Not only are these actions physically and emotionally abusive, they create an unhealthy, unproductive atmosphere in the workplace that holds employers accountable. In 2018, the #MeToo movement raised considerable awareness and visibility of sexual harassment and assault in the workplace, making clear the personal toll it takes on victims’ lives. As a result, more and more victims are taking legal action to bring justice and closure to their cases.  Sexual assault and sexual harassment are both situations that can be difficult to distinguish. For instance, a common question that arises in these cases is “Where does sexual harassment end and sexual assault begin?” Unfortunately, the answer to this question may not be as clear as you would think. Below we help to develop clarity around situations of sexual assault in the workplace, and what victims need to know after encountering such behaviors.

Sexual harassment, which is enforced by the EEOC, constitutes illegal sex discrimination under Title VII of the Civil Rights Act of 1964. The law defines sexual harassment as unwelcome verbal, visual, non-verbal or physical conduct of a sexual nature, or based on someone’s sex, that is severe or pervasive and affects working conditions or creates a hostile work environment.

There are a number of important phrases in this definition that are vital to understanding your rights as well as any potential legal claims you may have:

Even in cases of an employer who fails to take action that changes the status of your employment or directly results in you losing money (which would likely result if you had been fired, demoted, or had working hours reduced), you may still have a claim for unlawful sexual harassment if the conduct interferes with your work performance or creates an offensive, intimidating, or hostile work environment.

The U.S. Department of Justice, Office on Violence Against Women (OVW) has defined sexual assault as “any nonconsensual sexual act proscribed by Federal, tribal, or State law, including when the victim lacks the capacity to consent” (U.S. DOJ, OVW 2018).

While sexual assault is a criminal offense, the law also recognizes sexual harassment as a form of employment discrimination. The EEOC states that “unwelcome sexual advances, request for sexual favors, and other verbal or physical harassment of a sexual nature constitutes sexual harassment when this conduct explicitly or implicitly affects an individual’s employment, unreasonably interferes with an individual’s work performance, or creates an intimidating, hostile, or offensive work environment” (U.S. EEOC 2018a).

What You Should Do After Being Sexually Assaulted in the Workplace

When deciding what to do after determining your case of being sexually assaulted in the workplace, keep in mind every situation is unique. In most cases, there is no single best course of action. However, reporting the sexual assault or sexual harassment to your employer is an important first step. You’ll then have the option to continue with your company’s processes, file a charge with a state or federal agency, and/or take the matter to court.

Additionally, it’s important to consult an attorney or legal services that specialize in such matters of sexual assault and harassment. Experienced attorneys who help sexual assault victims can help you better understand the nature of your situation, your options, as well as the strengths and weaknesses of your case.

Takeaway Tips for Victims of Sexual Assault in the Workplace

Below we’ve distilled a series of additional tips offered by the Equal Rights Advocates to consider if you feel you’ve experienced sexual assault or sexual harassment at work:

Lastly, after you file a formal complaint with the EEOC and/or your state’s fair employment agency, you may also consider filing a lawsuit for sexual assault. The remedies you can seek in such cases may include the following: monetary damages; getting your job back (if you’ve been terminated or transferred to another position); and/or requiring your employer change its procedures to prevent future sexual assault and sexual harassment from occurring. If you are considering filing a lawsuit, you should contact an attorney to assist you.