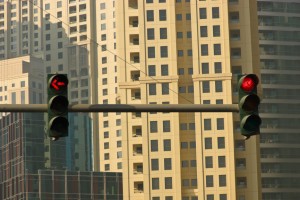 August 4-10, 2013 has been designated by numerous public safety organizations as “Stop on Red” week to raise awareness of auto accidents caused by people running red lights.  It is estimated by the Insurance Institute for Highway Safety (IIHS) that running red lights is the number one cause of traffic collisions in urban areas like San Diego, Los Angeles or the San Francisco Bay Area every year.  In fact, the statistics are startling:

There are very specific guidelines set forth in the California Vehicle Code for drivers approaching intersections controlled by traffic signals.  These include the following: California Vehicle Code §21453 states that any driver approaching an intersection and facing a steady circular red or red arrow signal must come to a complete stop at or before the limit line, prior to entering a crosswalk if there is no limit line and short of entering the intersection itself if there is neither a limit line nor a crosswalk.  This code does allow a driver to turn right on red but, only after coming to a complete stop and yielding the right of way to traffic crossing the intersection unless the driver is facing a red arrow, in which case, the driver should wait for the arrow to turn green.  The code further provides that pedestrians should not enter an intersection when facing a red light either unless they have a walk indicator from a crosswalk signal. In addition, California Vehicle Code §21452 provides that when a driver is approaching a yellow traffic signal they are “warned” that the green light is ending and the red light will appear “immediately thereafter.”

In my experience representing accident victims in and around the urban areas of California, including Los Angeles, I can, unfortunately, say that these statistics hold true in our urban areas.  I have probably seen hundreds of cases of persons being injured or killed as a result of people not stopping for red lights.  The problem is compounded by people also trying to “beat the light” as they approach an intersection with either a “stale” green light or a yellow caution signal.  Because of these dynamics, these incidents usually occur at a high rate of speed and involve a broad-side collision with the vehicles entering the intersection on the green light.  Oftentimes, this leads to serious and catastrophic injuries including head trauma, fractures, severe soft tissue injuries such as ruptured or herniated spinal discs resulting in nerve damage, and many other types of significant bodily harm.  In addition, these collisions tend to cause severe emotional trauma again based upon the speed of the vehicles and the level of impact.  Oftentimes, victims require ambulance transport and extensive trauma care.

I say all of this to simply remind the drivers of California to slow down when approaching an intersection with a light that has been green for some time or a yellow light and to STOP ON RED!  It could save a life!!