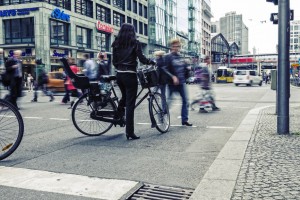 San Francisco, even more so than many other cities in California including Los Angeles, has become more and more a city of bike riders.  Cyclists are beginning to commute more to work and home in the “City by the Bay” but, unfortunately, aggressive bike riding recently led to the death of a pedestrian and caused an fairly uncommon scenario, namely, a biker being charged with vehicular manslaughter.

On the morning of March 29th, a software developer by the name of Chris Bucchere was commuting to work on his bike. As he approached the intersection in an area of the city used by many pedestrians, he ran through a red light and struck a 71 year-old man attempting to cross the street.  Nearby surveillance cameras caught the incident on tape allowing officials to estimate the cyclist’s speed at approximately 35 miles per hour or more. A story in the New York Times attributed statements to the cyclist as follows: “I laid it down and just plowed through the crosswalk in the least crowded place I could find.”  In a fairly unprecedented move, the bike rider was later charged and entered a plea agreement on criminal charges of vehicular manslaughter.

What Can This Incident Teach Us About The Laws As They Relate to Bicycles and Persons Traveling on Foot?

This incident implicates many provisions of California statutes including the California Vehicle Code and the Penal Code.  The most important of these, in my opinion as an attorney that has represented both cyclists and pedestrians in injury claims, are the following:

The analysis in this scenario would be that the bike rider (a “Vehicle” just like a car, truck motorcycle or any other “vehicle” as defined by California law), if he ran the red light or failed to come to a complete stop prior to the crosswalk and at the limit line prior to the light turning red, was guilty of at least an infraction.  The fact that he apparently saw pedestrians in the crosswalk and proceeded to “plow through” would be an additional infraction and may also show both negligence and “reckless” conduct causing a “risk of great bodily harm or death.”

From a civil liability standpoint, the cyclist may also be subject to both wrongful death damages for the loss of a loved one and the economic support associated with the decedent but, may also subject himself to punitive damages.  The civil standard for punitive damages is conduct, which shows a “conscious disregard for the rights and safety of others” under California Civil Code 3294.

The conclusion to be drawn is that bikers need to realize that they have all the “rights” of vehicles but, also all the same responsibilities!

Top 10 Most Important Laws For Bicyclists in California: http://www.victimslawyer.com/most-important-california-laws-bike-riders/