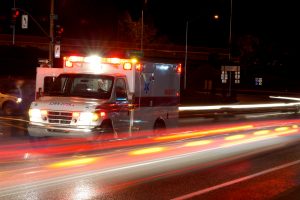 People in California must use reasonable caution when they drive to try to prevent accidents and injuries to others traveling around them. However, when drivers are confronted with sudden and unexpected dangers, they are not expected to use the same degree of caution that they would in calmer situations. In Abdulkadhim v. Wu, Cal. Ct. App. Case No. B298091, the court reviewed a case in which a man was forced to suddenly change lanes to avoid colliding with a stopped vehicle on the interstate when the man traveling behind him subsequently collided with the stopped vehicle.{1]

Jasim Al-Kuraishi was driving his vehicle on Interstate 10 near Rosemead CA on Oct. 11, 2014, at 1:00 am. He was traveling in the westbound lane going approximately 70 mph. Tommy Wu was traveling in front of Al-Kuraishi in the same direction when Wu saw a vehicle that was stopped in the lane in front of him about 20 to 30 car lengths ahead. Wu changed lanes by moving into the high-occupancy vehicle lane and passed the stopped vehicle while traveling between 40 and 50 mph. After he passed the vehicle and was about 400 feet in front of it, he saw Al-Kuraishi’s vehicle crash into the stopped car in his rearview mirror. The force of the collision caused Al-Kuraishi’s vehicle to travel into a different lane, and his car was struck by a second vehicle in that lane that was also traveling around 70 mph. Wu stopped his vehicle after witnessing the collision and called 911. When the paramedics arrived, Al-Kuraishi was pronounced dead at the accident scene.

Halah Abdul Abdulkadhim, Al-Kuraishi’s wife, filed a wrongful death lawsuit against multiple defendants on June 17, 2015, including Manuel Mendez, Jr., who was the driver of the disabled vehicle, Lesley Chavarria, who was the driver of the other vehicle that struck Al-Karaishi’s vehicle, and David Mendez, who was the owner of the disabled vehicle. She later amended the complaint to add Wu as a defendant on Oct. 7, 2016. Wu filed an answer to the complaint on July 14, 2017. On Dec. 7, 2018, Wu filed a motion for summary judgment. The court granted leave to the parties to supplement the evidentiary record about the sudden emergency doctrine at a hearing on the motion that was held on Feb. 22, 2019. At a hearing held on April 5, 2019, the court granted Wu’s motion for summary judgment. A judgment was entered in favor of Wu on July 2, 2020, and Abdulkadhim filed an appeal.

Issue: Whether Wu negligently changed lanes so late that Al-Kuraishi could not stop in time, or whether the sudden emergency doctrine applied?

On appeal, Abdulkadhim argued that Wu changed lanes to avoid the disabled vehicle so late that Al-Kuraishi did not have a reasonable amount of time to see and avoid Mendez’s vehicle. Wu argued that the sudden emergency doctrine preempted Abdulkadhim’s negligence cause of action against him and that there were no remaining issues of triable fact.

Rule: Under the sudden emergency doctrine, a person who is suddenly confronted by a danger that he or she did not create is not expected to use the same degree of care that a reasonably prudent person would use without the presence of the danger.

Motorists generally have a duty of care to exercise the same degree of ordinary care when they drive that reasonably prudent people would exercise under similar circumstances. Under the sudden emergency doctrine, a person who suddenly encounters an unexpected danger is not required to exercise the same degree of care that a reasonably prudent person would exercise under normal circumstances. Abdulkadhim argued that the sudden emergency doctrine did not apply to Wu’s case because he changed lanes so late that Al-Kuraishi did not have time to react in time to the stopped vehicle in his lane.

As we have previously explained, multiple vehicle accidents may involve several liable parties. When more than one party contributes to the case of an accident, each liable party will be responsible for paying his or her share of the damages.[2] In this case, Abdulkadhim sued several parties, including Wu. However, her case against Wu was dismissed by the trial court after the court found that the sudden emergency doctrine applied.

The court first noted that the appellant in an appeal involving summary judgment has the burden of showing that the trial court committed error in granting the motion. The appellant must cite to the record and to supporting authority. The court then noted that under the sudden emergency doctrine, a person who encounters a danger through no negligence of his or her own is not required to exercise the same degree of ordinary care that a reasonably prudent person would if the danger was not present. The sudden emergency doctrine does not apply in cases in which the person’s negligence causes or contributes to the creation of the dangerous condition.

The court affirmed the trial court’s order granting Wu’s motion for summary judgment. The case was dismissed, and Abdulkadhim was ordered to pay Wu’s costs on appeal.

Unexpected dangers on the roads can cause serious injury or fatality accidents. If you suffered serious injuries or lost your loved one because of an unexpected danger on the road, you might benefit from consulting with an experienced injury attorney at the Steven M. Sweat Personal Injury Lawyers. Request a free consultation today by calling us at 866.966.5240.