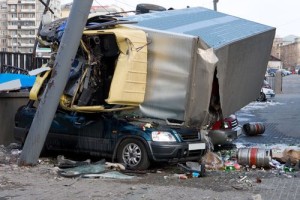 Let’s say you are in your vehicle headed to the grocery store and waiting at a stop light. You look up in your review mirror and see a truck twice the size of your hatchback barreling towards you. The driver is looking down at a cell phone, and he’s not slowing down. He rear-ends your car. You’re injured, and now you have medical bills and missed time from work.

The commercial truck driver isn’t the only one who may be held responsible for your injuries, medical bills and time lost from work due to vicarious liability. The trucking company who hired the truck driver can be held vicariously liable for the driver’s negligence under a legal principle called “respondeat superior.” That means “let the master answer.” The theory holds an employer liable for an employee’s negligence, like the trucker looking at his cell phone while in the course of his employment in our example.

Our trucker in our example was on the clock, driving the truck to be unloaded for his employer and the employer would have been paid for this service; so unfortunately for the employer, they could be held vicariously liable for your injuries. Alternatively, if the trucker was using the truck for a personal matter, like helping a buddy move while off the clock without the employer’s consent, then the employer could likely not be held responsible under vicarious liability.

A real life example of vicarious liability can be seen in the case of Pedro Diaz Rodriquez v. Enmanuel Parada, Business Solutions Transport, Penske Truck Leasing Corporation, and Does 1 through 30.

In February 2012, Mr. Rodriquez was driving along the interstate when he was rear-ended by a commercial truck driven by commercial truck driver Enmanual Parada. Mr. Rodriguez sustained injuries to his head, spine, neck, and left elbow. He underwent cervical fusion surgery to repair his spine, and claimed to continue to experience pain as a result of the auto accident injuries.

Although Penske Truck’s vehicle was determined not to be at fault, Business Solutions Transport was not so lucky. As Mr. Parada’s employer, they were held vicariously liable for the injuries Mr. Rodriquez sustained, because the case involving their employee, Mr. Parada, met the factors outlined above:

By way of jury verdict, Mr. Rodriquez was awarded $3.8 million dollars finding Mr. Parada’s negligence was the substantial factor causing harm. Mr. Rodriquez likely hired an experienced commercial truck accident attorney to assist with his case so he received compensation for his injuries, past and future medical bills, and past and future lost wages from work.

Attorneys who specialize in handling motor vehicle accidents involving commercial trucks understand vicarious liability, and how it relates to pursuing the rights of accident victims in court. If you are involved in a crash causing injury or death related to the negligence or wrongdoing of a commercial vehicle operator, it’s in your best interest to consult a commercial truck accident attorney.