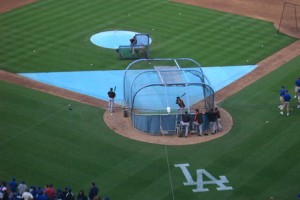 There does not seem to be any dispute that the parking area where the beating occurred in this case was owned by the Dodgers.  There is also no dispute that Mr. Stow has sustained major, life altering injuries including head trauma which left him an a coma and has since caused him to have permanent loss of cognitive and bodily function (although the defense will no doubt dispute the extent of the injuries and the cost of present and future medical care).  What is really at issue in this case is whether the Dodger’s ownership was “negligent” in the “use or maintenance” of the parking area in question and whether this negligence as a “substantial factor” in causing the harm.  The plaintiff has several arguments that seem to center around the lack of proper security measures including alleged poor lighting and lack of security personnel patrolling in this area at the time of the beating.  There apparently will be evidence that security was scaled back prior to the incident by owner Frank McCourt as a cost saving measure. The defense is counter arguing that the security on site on the date of the incident was sufficient for this size sporting event and venue.  No doubt, experts will testify on both sides as to the adequacy or inadequacy of security guards and police presence.

Generally, a property owner in California is not liable for criminal conduct by third parties unless it is foreseeable.  Mr. Stow’s attorneys will argue that a property where rival fans congregate, are served copious amounts of alcohol, and are let out of the stadium after skirmishes or verbal arguments are engaged in inside the stadium, should be enough to put Dodger Stadium on notice of a need for tight parking lot security.  The defense will likely argue that the security provided was reasonable even given all of those factors.

When is a sport team or other commercial enterprise liable for negligent hiring, training or supervision of security staff under the laws of the State of California?

Next at issue on the liability front will be arguments that the Dodger’s organization failed to act reasonably in the manner in which they hired, trained or supervised their employees retained to surveill and secure the property.  This claim requires proof of the following:

Again, if staff were supposed to be patrolling the area in which the assault and battery took place but, were not, then arguments could be made that such failure was based upon inadequate screening, training or supervision of these security guards.  Likewise, if staff were not trained or supervised to remove rowdy patrons who engage in verbal altercations inside the stadium, a security expert may opine that this was the result of poor training and/or supervision.  The defense will likely counter that the staff was adequately trained and supervised but, they couldn’t possibly be in all places at once nor could the Dodgers foresee that a verbal altercation in the stands could result in a near deadly beating in the parking lot.   A jury will have to decide who is right on these issues.  CA Civil Jury Instruction 426.

For more information on negligent security claims in California including at sporting events in Los Angeles, click here.