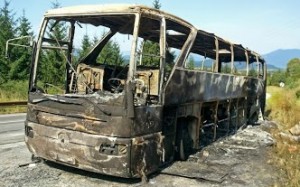 Given the spate of recent commercial tour bus crashes across the country including in California, many are asking whether there should be more oversight of these commercial tour bus and trucking companies.  Various federal agencies, including the National Traffic Safety Administration are faulting a lack of oversight of these companies as a principal cause for these incidents which have caused injuries and deaths across the country. (See article here).  Many are saying that the Federal Motor Carrier Safety Administration has been lax in it’s inspection and certification processes and needs to be overhauled.  They cite to the following examples:

Incidents like these have raised red flags with the riding public and various federal officials.  The Federal Motor Carrier Safety Administration has responded by saying that the number of charter tour bus companies it has deemed unsafe and taken off the road has tripled in the past few years.  The question still remains as to if the agency is adequately staffed and equipped to conduct full and thorough inspections and certifications or decertifications as it presently exists.

What can California consumers do to try to make sure they are not the victim of a commercial bus crash?

It is estimated that tour and intercity buses carry about 700 passengers in the U.S. every year.  Many of these travel for events related to church, school or other community activities. This is second only to commercial airlines in the number of passengers serviced.  While most intercity buses in California are controlled and regulated by various government agencies like METRO, BART and SDMTS, commercial tour buses are usually operated by private entities.  The best thing to do prior to taking a trip on one of these lines is to do some homework.  The internet is a great resource to find out if the bus line in question has a bad track record for maintenance, accidents, and driver errors.  The Federal Motor Carrier Safety Administration has a website dedicated to providing consumers information about commercial bus travel (See Link:  http://www.fmcsa.dot.gov/safety-security/pcs/Index.aspx).  You can also just conduct a general news search about incidents involving the particular charter company.

What Can You Do If You Are The Victim of A Charter Bus Accident in California?

The best thing to do if you or a loved one are a passenger on a commercial charter bus in California that crashes and causes persons to be injured or killed is to consult with an experienced personal injury attorney familiar with investigating and prosecuting claims related to bus accidents.  There are many potential complications that make the prosecution of these claims difficult without competent legal counsel.  If the incident occurs on a bus line being run by a government agency, you may have as little as 6 months to file a government tort claim and limited time thereafter to file a lawsuit depending upon whether the claims is accepted, rejected or ignored.  If you are dealing with a private bus company, there is much leg work that needs to be done to investigate the prior accident and claims history of the company and any involved driver and to determine the factual cause of the accident and then analyze whether the facts constitute negligence (or even willful or wanton misconduct) under California law.