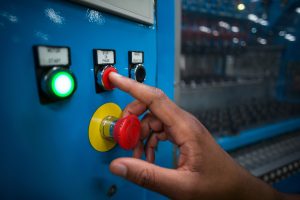 While most workers who are injured at work will be limited to recovering benefits from workers’ compensation, some exceptions to the general rule exist. In Santos v. Crenshaw Manufacturing, Inc., , Cal. Ct. App. Case No. G057371, the appeals court considered whether an exception applied in a lawsuit filed by a worker whose hand was mutilated by a power press without a guard.

In Jan. 2017, Marivel Santos was working at Crenshaw Manufacturing as a machine press operator. During the second week of the month, Santos’s supervisor, Jose Flores, told her to operate a machine using a die without protective guards. Her supervisor told her to operate it from the side with one hand while inserting her other hand inside of the machine to hold the material in place. When she did, her hand was crushed and mutilated by the machine. Santos filed a workers’ compensation claim against the company. She also filed a lawsuit against Crenshaw under the power press exception to the workers’ compensation law for the company’s failure to have guards installed on the machine.

The machine that Santos had been working with was a 1937 Niagara A3 frame gap press. Crenshaw had acquired it from Crenshaw Die & Manufacturing Inc. in 2013. The president of Crenshaw Manufacturing, Waleed Mansour, said that Crenshaw had not communicated with Niagara and had only received instructions and a parts list from the company for the machine. The instructions stated that it was the responsibility of the employer to provide guards for the machine. A second warning in the instructions said that adequate guards should be provided to protect operators when they were using dies.

The press also had four visible warnings, including two that were bolted onto the machine and two warning decals. One of the bolted warnings said that the machine came with guards attached and warned against removing them.

Crenshaw filed a motion for summary judgment, arguing that Santos had failed to meet her burden under the power press exception. It argued that workers’ compensation was her only remedy because Niagara had not specified, designed, or installed a guard. Crenshaw submitted a declaration by its expert, Manning, that the warnings in the instruction manual did not meet the guidelines under Cal. Lab. Code 4558 because they did not specify a particular type of guard. He also opined that only the patent decal had been affixed to the machine by Niagara and that all other decals had been affixed by someone else.

Santos filed a request for an extension of the summary judgment hearing because she had not had the opportunity to depose some witnesses. Crenshaw opposed the motion and argued that she had not met her burden of proving the type of evidence she was seeking. The trial court denied the motion for a continuance. At the summary judgment hearing, she argued that Crenshaw had failed to show that Crenshaw Die & Manufacturing had altered the machine. She submitted a declaration from her expert, William Phelps, in which Phelps stated that the bolted warnings had been installed by Niagara. He also stated that the pneumatic two-hand control listed on the parts list was a type of guard because it was designed to keep the operators’ hands outside of the machine. However, this had not been installed.

The trial court granted Crenshaw’s summary judgment motion. It found that Crenshaw had established that the instruction manual was the only communication the company had received from Niagara. It also found that Santos had not presented any evidence that Niagara had affixed the warnings to the machine. Santos filed an appeal.

Issue: Whether Santos presented sufficient evidence of triable issues of material fact about whether her claim fell under the provisions of Cal. Labor Code 4558?

Santos argued that the court erred when it granted Crenshaw’s motion for summary judgment. She argued that instead of liberally construing the facts and evidence in the light most favorable to her, it instead did so for Crenshaw. When a party moves for summary judgment, the court is supposed to strictly construe the evidence for the moving party and liberally construe it for the opposing party. Santos also argued that the Manning declaration was speculative and did not present any evidence that Niagara had not installed the warnings on the machine.

Rule: While workers’ compensation is normally the exclusive remedy for workplace injuries, an exception exists when an employer knowingly removes or fails to install a guard on a power press.

Under Cal. Labor Code § 3602, most workers in California who are injured at work are only able to pursue compensation through the workers’ compensation system and cannot sue their employers to recover pain and suffering damages.[2] However, Cal. Labor Code § 4558 provides an exception to the general rule when an employer knowingly fails to install or removes a point of operation guard on a power press.[3]

In the Santos case, the court began by looking at the legislative intent behind § 4558. It pointed out that the legislature clearly wanted to protect workers in situations in which employers fail to install guards or willfully remove them from power presses by allowing workers to hold them liable. The court looked at several subdivisions of 4558. One subdivision defined failure to install as an employer’s failure to install a guard required or provided by the machine’s manufacturer. However, liability will not attach if the manufacturer did not design, provide, install, or require a guard by the specification. Proof of communication can come from any source.

The appeals court reversed the trial court’s decision to grant the motion for summary judgment. The case was returned to the trial court for further proceedings, and Santos was awarded her costs on appeal.

Get help from a Los Angeles work injury lawyer

If you have been seriously injured at work, you may have legal rights to recover workers’ compensation benefits. If an exception to the workers’ compensation law exists in your case, you might also be able to file a claim against your employer for negligence. An attorney at the Steven M. Sweat Personal Injury Lawyers can evaluate your claim and talk to you about your legal options. Contact us today at 866.966.5240 to request a free consultation.