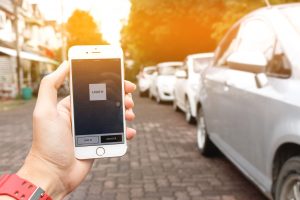 Many people in Los Angeles and throughout California use Uber as a convenient and affordable mode of transportation. Uber has a duty to screen its drivers and take steps to protect people who use its app to hail rides. However, this duty covers when an Uber passenger rides with an Uber driver. In the case of Jane Doe No. 1 v. Uber Technologies, Inc, Cal. Ct. App. Case No. B310131, the California Court of Appeal considered whether Uber’s duty extended to situations in which women were assaulted by fake Uber drivers.[1]

Between June 2017 and Feb. 2018, three women in Los Angeles each attempted to use the Uber app to hail rides home after spending their nights out at clubs where they consumed alcohol. In each of the women’s cases, fake Uber drivers who had purchased Uber decals from the company’s website and attached them to their vehicles pulled up instead of the Uber drivers. Two of the women did not try to verify that the vehicles and drivers were the right ones before getting into the vehicles. The third woman noticed the license plate number didn’t match, but the fake Uber driver convinced her to get in by claiming he had recently crashed his car and had not yet updated his information in the app.

The women filed a lawsuit against Uber, alleging the company had negligently failed to protect them by providing the decals on its website. Uber filed a demurrer, which the trial court granted. The women then filed an amended complaint after being given leave to do so by the trial court. The amended complaint alleged causes of action for strict product liability and negligence.

In the second amended complaint, the women alleged Uber had failed to warn them about rapists acting as fake Uber drivers in Los Angeles or to take steps to protect them. They also argued that Uber created the risk of harm by the way it designed its platform. Uber filed a demurrer to the second amended complaint, and the trial court granted it without giving the women leave to amend. It found that for the negligence cause of action, the women had not established that a special relationship existed between them and Uber for a duty to arise. The court then issued a judgment dismissing the case, and the women filed an appeal.

Issue: Whether Uber Owed a Duty to Protect the Women from Third Parties?

Rule: There is no general duty to protect people from the conduct of third parties unless an exception exists.

Under the laws of California, parties generally do not have a duty to protect others from the actions of third parties unless an exception applies. Two exceptions exist when there is a special relationship between the party and the victim or have a contractual relationship.

The court noted that the California Supreme Court had established a two-step test to determine whether an exception to the no-duty-to-protect rule. The first step involves determining whether there is a special relationship between the parties or another set of circumstances that create an affirmative duty to protect. The second step involves determining whether a duty to protect has been created through a contractual relationship.

The court began by considering whether Uber had a special relationship with the three women that gave rise to a duty to protect. The women argued that Uber owed them a duty due to its special relationship as a common carrier through which they tried to seek transportation services. They argued that this relationship created a duty for Uber to warn them about the risks of rapists posing as Uber drivers in the area where they were abducted and assaulted.

The women argued that they had each hailed rides through the Uber app at the time they were abducted, had been accepted as passengers, and were waiting at their designated meeting points. They argued that this taken together with the fact that Uber was aware of the fake Uber scheme within a five-mile radius of where they were, a special relationship and a duty to warn them had been created.

Common carriers owe a heightened duty of care to passengers while they are being transported as well as shortly before and after their transportation. The duty exists as long as the common carrier has control over the passenger’s transportation. The court found that Uber had no control over the women and their movements before they were picked up. Uber did not owe a duty to protect the women from getting into vehicles with fake Uber decals and did not control what occurred during their rides.

The court next considered whether a special duty had been created by the contractual relationship between Uber and the women. In general, a contractual duty to protect only arises when the contract calls for it. The women did not argue that their contracts with Uber contained express promises to protect them. Instead, they argued that Uber’s website promised safe pickups and rides and that this statement created an implicit promise that they would be protected.

In some cases, a party’s misfeasance that creates the risk can form the basis of legal action. However, this involves more than a failure to protect and instead involves both a failure to protect and action that makes the situation worse. The women argued that Uber had created the worsened situation by hiding reports of sexual assault in the area and the existence of the fake Uber scheme, making the situation more dangerous. However, the court found that while the rapists’ actions might have been a foreseeable result of Uber’s business model, Uber’s business operations did not include the risk as a necessary component of how it does business. The court found that there was no special or contractual relationship between Uber and the three women, and the company had not engaged in misfeasance resulting in the creation of the risk.

The court affirmed the trial court’s order dismissing the case. It ordered that the parties would each be responsible for their own costs on appeal.

Talk to an Experienced Injury Attorney

If you were assaulted while riding in an Uber by the driver, you should speak to an experienced Uber injury lawyer about your rights. Contact an attorney at the law firm of Steven M. Sweat, Personal Injury Lawyers, APC to request a free case evaluation so that you can learn about your legal options by calling 866-966-5240.