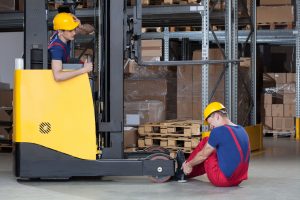 In California, people who have been seriously injured by defectively designed products may be entitled to recover damages in a product liability lawsuit. The courts may instruct the jury about the tests that they should apply when evaluating an alleged design defect. However, as Verrazono v. Gehl Co., Cal. Ct. App. Case No. A152318 shows, the court is not always required to provide the instruction proposed by the plaintiff.[1] Some cases involving serious injuries from products will not provide the basis for the recovery of damages. (Note: for a full discussion on workplace injuries and how they can involve various types of claims including work comp, personal injury and product liability, click here).

In 2012, Gary Verrazono was operating a rough terrain forklift at the Sonoma Raceway in Sonoma County. It tipped over, seriously injuring him. He then filed a lawsuit against Gehl Co., the manufacturer of the forklift, alleging that the forklift had a design defect because it lacked a non-removable door and a seatbelt system with more than two points. He also alleged that the forklift should have contained an interlock system that would have prevented its operation without the operator wearing the seatbelt. The case proceeded to trial, and the jury returned a verdict in favor of the defense.

The forklift was designed to travel off of paved areas and also had a telescopic boom that could lift loads of up to 8,000 pounds up to 42 feet. The forklift was equipped with seatbelts that the operator was required to wear. It also had numerous warning stickers, including a warning not to use it on a slope of greater than 10 degrees. Another warning directed the operator not to move the forklift while the boom was extended and included a statement that doing so could cause the forklift to tip over.

Verrazono had been trained in how to operate forklifts, including rough terrain forklifts and had been re-certified in their operation every two years from 2002 to 2010. On the date of his accident, he had approximately 1,000 hours of experience operating forklifts. He was asked by a chef at the racetrack to move some industrial ovens in a section of the racetrack that was enclosed by a fence. Verrazono looked for a regular forklift but could not locate an unlocked one. He then selected the rough terrain forklift, which was manufactured by Gehl Co.

At trial, Verrazono admitted that he did not wear the seatbelt on the date of the accident even though he normally did. He also testified that he was operating the forklift on a slope that was between 22 and 33 degrees and that the boom was elevated by about 27 degrees. Verrazono and his coworker tried to find a way to get to the industrial ovens behind the fence. Verrazono then backed up the forklift, and his coworker testified that he heard a screeching sound before the forklift fell over. While it was tipping over, Verrazono was ejected from the forklift. The forklift then fell on his right shoulder and leg, and he remained pinned underneath the machine for 48 minutes before he could be removed from beneath it. His right arm and leg had to be amputated because of the accident.

Verrazono called an engineering expert to testify named Steven Myer. Myer testified that if there had been a nonremovable door, Verrazono would not have been thrown free from the forklift and would likely have avoided the amputations. He also called a biomechanical expert named Wilson Carl Hayes. Hayes likewise testified that a nonremovable door would have prevented Verrazono’s legs and arms from extending outside of the vehicle so that he would not have suffered amputations.

The jury returned a verdict for the defense. Verrazono filed a motion for a new trial, arguing that the court erred when it refused to give a jury instruction about consumer expectations. He also argued that the court erred when it gave the jury a deadlocked jury admonition when it said it could not reach a verdict. Finally, he argued that the weight of the evidence did not support the jury’s verdict. The court denied his motion, and he filed an appeal.

Verrazono argued on appeal that while forklift operators can reasonably foresee a tip-over accident, they could not reasonably foresee being thrown from forklifts and suffering the types of serious injuries that he suffered. Because of this, he argued that the court should have given the jury the instruction about the consumer expectation test. He also argued that the court erred when it gave a deadlocked jury admonition when the jury informed the court it was struggling to reach a verdict because the admonition had the effect of coercing the jury into reaching a defense verdict.

Rules: 1) Under the ordinary consumer expectation test, a product’s design is defective if it does not perform in the way that an ordinary customer would expect. 2) When a jury informs the court that it is struggling to reach a verdict, the court may give a deadlocked jury admonition.

In California, under the ordinary consumer expectation test, a product must safely perform in the way that an ordinary customer would expect it to perform when the consumer is using it in the manner in which it is intended to be used or in a way that the manufacturer could reasonably foresee. When juries are deadlocked, the court may give a deadlocked jury admonition under CACI No. 5013.[2]

The court began by examining whether the trial court erred when it refused to instruct the jury about the ordinary consumer expectation test. The court noted that two alternative tests may be used in defective design claims, including the ordinary consumer expectations test or the risk-benefits test. The court looked at the decision in Soule v. General Motors Corp., 8 Cal.4th 548 (1994).[3]

The court then looked at whether the court erred when it gave the jury the deadlocked jury admonition. Courts are allowed to give this instruction when a jury notifies the court that it is having trouble reaching a verdict. The court did not find that the instruction coerced the jury and found that it did not act in error.

The court affirmed the trial court’s decision and upheld the jury’s verdict. The plaintiff was ordered to pay Gehl Co.’s costs on appeal.

Get help from an experienced Los Angeles product liability attorney

This case illustrates that not every serious injury from using a product will be compensable. If you have been seriously injured by a product, you should talk to an experienced product liability attorney at the Steven M. Sweat Personal Injury Lawyers for an evaluation of your potential claim. Contact us today by calling us at 310.592.0445.