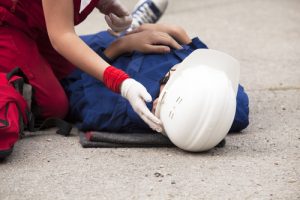 Workplace deaths from industrial accidents is on the Rise in the U.S. according to recent studies.  Most Californians do not go to their jobs with the idea that they could be injured or killed at their workplaces. Unfortunately, many people suffer serious injuries or fatalities while they are working on the job each year. Recent data shows that the number of workplace fatalities across industry sectors sharply increased from 2015 to 2016. If you have lost your loved one in a workplace accident, it is important that you speak to an experienced Los Angeles personal injury attorney for help.

According to the Census of 2016 Fatal Occupational Injuries Report that was released by the U.S. Bureau of Labor Statistics, 5,190 people were killed while they were working on the job during the year. The number of fatalities increased by 7 percent over the number of workers who were killed in 2015. The fatality rate increased from 3.4 deaths per 100,000 workers to 3.6 deaths per 100,000 workers.

Most affected industries and workers

While fatalities at work happen across industries, they are more common in certain sectors. The BLS reports that extraction workers and first-line supervisors in the construction industry suffered the highest number of deaths at 134. Groundskeeping and landscaping accounted for 125 fatalities. A total of 101 roofers were killed. Other types of jobs with high numbers of fatalities included tree trimmers, drivers, auto mechanics and agricultural workers.

When workplace accidents result in worker fatalities in California, certain surviving family members are eligible to recover death benefits from the employers’ workers’ compensation insurance carriers. People who are eligible to receive these benefits include the spouse, child or other dependents of the workers who are killed in accidents or who die because of illnesses caused by their work environments. The eligible family members must seek these benefits no later than 240 months after the date of the injury. They must also seek the benefits within one year of when the death occurred.

Death benefits are paid at the same rate as total permanent disability payments, but they will not be less than $224 per week.

When deaths are caused by third parties

Being able to hold a third party liable in a wrongful death action while also recovering death benefits through workers’ compensation may allow surviving family members to recover maximal damages so that they are fully compensated for all of their losses.

It is devastating for families when their loved ones are killed in workplace accidents or succumb to illnesses that they have contracted because of their jobs. If you have lost your loved one to a workplace injury accident or a work-related medical condition, you may need legal help. It is important for you to talk to a Los Angeles personal injury lawyer who is experienced in handling workers’ compensation, personal injury, and wrongful death claims. Your lawyer may thoroughly investigate your loved one’s case to identify any third parties who may hold liability in addition to your claim for death benefits. Contact our office today to schedule your free consultation.