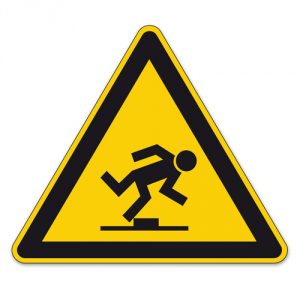 A recent California case involving a woman who was injured when she tripped over an unattended ladder in Target demonstrates both the business’s knowledge requirement as well as its duty to remove hazards, keeping the premises reasonably safe. In the case, an 83-year-old woman tripped over the ladder, fracturing her hip.

An 83-year-old woman was shopping at a Target in Escondido, California, on Dec. 8, 2014. As she was walking down one aisle, she tripped over a 23-inch-tall stepladder that had a 4-foot handle. A worker had left the stepladder unattended. The fall caused her hip to fracture. She filed a lawsuit against Target based on a theory of premises liability on Feb. 11, 2015.

Target argued that its workers were simply following the procedures for stocking that the store had in place. It argued that the woman should have used her cane to help her navigate through the aisle and that it was not negligent. Target pointed out that the woman had stated on several occasions that she saw the ladder before falling over it, and she should have exercised reasonable care to avoid it.

After a trial lasting for five days, the jury returned a verdict in favor of the plaintiff. It found that Target was 90 percent liable, and the woman was 10 percent liable. The gross verdict award was $1,734,167.08. After subtracting out the woman’s contributory negligence, the net award she received was $1,560,750.37.

The case involves the issue of whether or not an employer may be liable for the actions of its employees when the employees are following set store policies. Secondarily related, an issue also exists about whether or not the time that the ladder was left before the accident was enough to allow the business owner to remedy the hazard. Case law in the state is illuminative.

To be liable, a business needs to have constructive or actual knowledge of the existence of a hazard. One way a person may prove constructive knowledge is by proving how long the hazard existed before the accident happened. In Ortega v. KMart Corp., a plaintiff was injured when he slipped in a puddle of milk. He did not know how long the milk had been there and could not offer evidence proving whether or not the store had sufficient time to discover the hazard and to clean it up. He argued that stores normally have set inspection schedules that the document.

In the instant case, the employees clearly knew of the hazard as they had left the stepladder in its position. Although testimony was presented that it had been left unattended for only a few seconds, Target, through its employees, had actual knowledge of the hazard’s existence. This differs from the Ortega case’s fact pattern. What is more applicable is Hatfield v. Levy Brothers, a California Supreme Court case from 1941. The rule in that case is that if the business creates a hazard and leaves it, the business has acted negligently. A business may not later claim that it had a lack of knowledge if the hazard was created by employees acting within the scope of their employment, which is what occurred in the instant case.

Business owners owe a duty to people who are lawfully on their premises to keep the premises reasonably safe and free from dangerous conditions. If a business or its employees create a hazard, it has the immediate responsibility to remove it rather than leaving it unattended even if only briefly. People who are injured while on the premises of a business may want to consult with a personal injury attorney who has experience with handling premises liability cases.