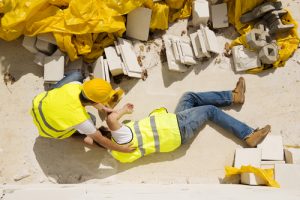 In California, people who are injured while they are working may recover workers’ compensation benefits through their employers’ insurance carriers. In addition to workers’ compensation benefits, workers who are injured at work may be able to recover damages from third parties that were negligent and contributed to their accidents’ causes. In Anaya v. General Equipment & Supplies. Inc, et al., Los Angeles County Case No. BC594187, the family of a worker who was killed at work sued a third-party manufacturer of the equipment with which he was working.

The trial lasted for seven days. Both the plaintiffs and the defendant called civil engineers as technical experts at the trial. The jury deliberated for one-and-one-half days before returning with a verdict for the plaintiffs. The gross verdict award was $30 million. The jury found that General Equipment & Supplies was 70 percent at fault and that the employer was 30 percent at fault in causing the accident. Since R.J. Noble was not a party to the lawsuit, the net verdict award was $21 million.

In California, workers who are injured at work and the families of those who are killed are unable to sue their employers for negligence. Instead, their sole remedy against the employers is to file claims for workers’ compensation benefits. Minors are eligible for death benefits when they lose a parent. When there is one minor, the child may receive a maximum of $250,000. If there are two, the death benefit is a maximum of $290,000. When there are three children such as in this case, the death benefit from workers’ compensation is $320,000. If the children in this case had only been able to file a claim for workers’ compensation benefits for the wrongful death of their father, they would have been limited to a recovery of $320,000. However, people are able to sue negligent third parties whose negligence contributed to the accidents.

Third party manufacturers of defective equipment may be liable to pay damages to the victim’s family members. In these types of cases, the family members may file claims for workers’ compensation benefits from their loved one’s employer and file a separate lawsuit against the third-party manufacturer for the defective equipment. The ability to file a lawsuit against the negligent third party may result in substantially higher damages than if the people were limited to filing claims for workers’ compensation benefits alone.

If you have been seriously injured while you were working at your job or have lost a loved one to a workplace accident, you might want to talk to an experienced personal injury and workers’ compensation attorney in Los Angeles. A lawyer may be able to identify third parties that might also be liable for causing the accident so that their clients might recover higher damage amounts.