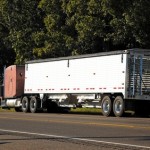 Can a delivery truck driver be liable for negligent parking under the laws of the State of California?  This was the question presented recently to the California Supreme Court in the matter of Cabral v. Ralph’s Grocery Company 179, Cal.App.4th 1.

Facts of the Case:  A semi truck operator employed by Ralph’s Grocery Company pulled off the freeway in San Bernardino California to eat his lunch.  He parked his vehicle in a dirt area alongside the interstate highway.  He testified that he routinely parked in that spot to eat his lunch.  At the request of the California Highway Patrol, CalTrans had previously placed an “Emergency Parking Only” sign near the area as it had become a spot where truckers were pulling off and stopping for non-emergency reasons.  Plaintiff was traveling at a high rate of speed and inexplicably lost control of his vehicle and slammed into the rear of the tractor trailer and was instantly killed.  There was no indication that the driver was intoxicated prior to the crash and the best speculation was that he may have fallen asleep at the wheel or had some medical condition that caused him to swerve off the road and collide with the semi truck.

Result of the Jury Trial: The jury found that the plaintiff was 90 percent at fault for the accident but, found that the Ralph’s truck driver and (vicariously) Ralph’s Grocer Company was 10 percent at fault for parking the truck in an emergency stopping area without exigent circumstances warranting such a stop.  The defendant, Ralph’s, brought a Motion for Judgment Notwithstanding the Verdict (so-called “JNOV”).  The trial judge granted the motion and nullified the jury verdict for wrongful death in favor of plaintiff’s surviving heirs.

Result of Appeals of the Jury Verdict: The initial Court of Appeal decision was to uphold the decision of the trial judge.  However, upon review by the California Supreme Court, the decision to nullify the verdict against Ralphs Grocery was overturned.  The Court held that there had in fact been enough evidence for a jury to place some amount of blame (in this case 10%) to the driver of the 18 wheeler for parking his truck in an unauthorized and illegal manner.

The two issues presented upon appeal were as follows:

1. Did the truck driver have a legal duty that was breached:  The court started with the basic law of negligence in California which is codified in Cal. Civil Code 1714 and states: “every person is responsible … for an injury occasioned to another by his or her want of ordinary care.”  It further used the criteria laid out in the landmark decision of Rowland v. Christian (see prior blog post here), i.e. forseeability of causing harm, likelihood of causing bodily injury, difficulty of protecting against the risk of harm in making its decision.  Using these criteria, the CA Supreme Court held a duty did exist on the part of the truck driver and whether that duty was breached was a question of fact for the jury to decide.  They expressed this opinion, inter alia, as follows:

“If a duty is imposed under the facts of this case, where does it end?’ [Citation.] In turn, I ask: If a duty is not imposed under the facts of this case, then where does it begin?” Indeed, one might ask under what circumstances Ralphs would have us recognize a duty of ordinary care in stopping alongside a freeway, if not in these. If stopping 16 feet from the traffic lanes exempts a driver from the duty of care, does the same hold for parking six feet from the lane? Six inches? If we are to create immunity for a truck driver stopping for a few minutes to have a snack, should we also do so for one who decides to sleep for hours by the roadside rather than pay for a motel room? Would the categorical exemption Ralphs seeks still apply if a tractor-trailer driver parked an inch from the traffic lanes, on the outside of a curve, leaving the rig there all night without lights? To ask these questions is to see why a categorical exemption is not appropriate. The duty of reasonable care is the same under all {Slip Opn. Page 26} these circumstances; what varies with the specific facts of the case is whether the defendant has breached that duty. That question, as discussed earlier, is generally one to be decided by the jury, not the court.”

2. Did Parking The Truck On the Side of The Freeway “Cause” The Death:  Here the court used the “substantial factor” test explained in prior posts and determined that a reasonable jury was entitled to conclude from the evidence presented that the parking of the truck on the side of the road was a factor in causing the driver’s death.  They held in pertinent part as follows:

Important Points to Draw From This Decision for Victims of Personal Injury in California:

Decisions like this one show that the civil justice system in California is reluctant to allow judges to simply decide on their own that there should be no legal responsibility for an injury or death in contrast to a jury decision otherwise.  While many factors may contribute to the bodily harm or death of a person, negligence on the part of any person or business should be analyzed as one of many causes and a jury should be allowed to apportion fault for this type of incident.