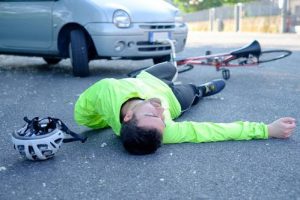 A recent jury verdict in Santa Cruz County shows how bicycle accidents may involve more than one vehicle, and if the second driver fails to take action to avoid hitting the cyclist, the second driver may be held to be civilly liable and ordered to pay damage for his or her percentage of fault.

The case involved a wrongful death case in which a farmworker who was riding his bicycle to work was first struck by a car. After landing in the middle of the lane, the man was reportedly talking and moaning. He was then run over by a Ford F-150 that crushed his head and his chest with its tires. The driver of the first car said that the bicyclist had veered in front of him, making the initial collision unavoidable. People who stopped in an effort to help the man after the first crash reported that they had tried to direct traffic away from the man in order to alert other drivers that he was lying in the roadway before the truck hit him. The man’s wife and adult children filed a wrongful death civil lawsuit against the driver of the Ford F-150.

The defendant argued that the second accident couldn’t be avoided and disputed liability for it. The defendant asserted the imminent peril defense, arguing that there was no time to react or avoid the bicyclist in the roadway. He also argued that the injuries the cyclist received from the first collision were not known and that the first car’s traveling at 50 mph when it hit the man likely provided a fatal injury, thus negating the crushing injuries and liability from the second wreck.

After a trial that lasted for two weeks, the jury deliberated for a day and a half before returning with a verdict in favor of the plaintiffs. The jury’s verdict was in the amount of $3.6 million, with $300,000 earmarked for each of the man’s seven adult children and the remaining $1.5 million awarded to the wife. The jury also found that the defendant was 30 percent liable and that the bicyclist was 70 percent liable for the accident. While the jury was still deliberating, the plaintiff and defendant settled for $2.5 million.

California follows what is know as a pure comparative fault rule in injury cases. California’s approach was adopted in the 1975 decision in Li v. Yellow Cab Co. Under the comparative fault rule, each person holding fault in an accident is responsible for his or her own percentage of liability. That means that plaintiffs will have their awards reduced by their percentage of fault. In this case, since the decedent held 70 percent of the liability, it means that the actual award would be reduced by that percentage.

If your loved one was killed in a similar bicycle accident, you will likely need to get help from a California personal injury attorney familiar with bike accident claims in order to recover damages for your loved one’s loss. Your attorney may use experts in order to prove that the motorist was liable. In many cases, an attorney may be able to convince insurance companies that it is best for them to settle without going to trial by presenting the companies with the experts’ reports. Contact a California bike accident lawyer today to learn more about your rights in your loved one’s accident.